The Upper Klamath (Class IV+) begins in the Cascades of southern Oregon at John C. Boyle Powerhouse and runs down to Copco Lake just south of the California-Oregon Border. . The 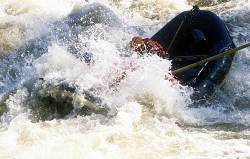 Klamath carves it's way through the volcanic Cascades and is one of two Oregon rivers to cut its way through two mountain ranges. The canyon flows through the huge red and black rock crags of Klamath National Forest . The Upper Klamath is along the Pacific Flyway; providing an abundance of birds such as eagles, osprey, pelicans, herons and more..a definite treat if you're into bird watching.

The first few miles are class III allowing you a little time to warm up. Once you get into Hell's Corner Gorge it is non stop whitewater. After "State Line Falls" the Klamath eases up to some class III whitewater rafting and some pleasant floating down to take-out. The Upper Klamath can be done in one or two days. Most Commercial outfitters run the whole river on day one, camp at one of the BLM campsites near JC Boyle Powerplant and then put-in just above Caldera and run the gorge again on day two.